Respecting Trans Identities: Why It Matters

By now, you have probably heard of Florida’s Don’t Say Gay Bill, which Florida Governor Ron Desantis signed yesterday. HB 1557, or the “Parental Rights in Education” law, takes effect in July 2022 and “prohibits instruction on sexual orientation or gender identity in kindergarten through grade 3 or in a manner that is not age-appropriate or developmentally appropriate for students.”

Governor DeSantis refers to “transgenderism” education as “injecting sexual instruction to 5-, 6- and 7-year-old kids.” Referring to the trans experience as an -ism deliberately ties it to either a disorder or an ideology, both of which harm the LGBTQ+ community. On the other hand, in an OpEd about why this issue matters, Northeastern University student Renée Abbott says this law is “unrealistic because it is addressing something that is not a real issue.”

However, HB 1557 is not simply a law that doesn’t need to exist. Laws like this one (it is far from unique) target youth that may identify as LGBT+ or queer–a demographic that is already poorly treated and poorly understood. This has serious ramifications for LGBTQ+ children, and we must not allow laws like this to spread to North Carolina. I’m going to explain more about the situations behind this law and why it matters that we keep talking about it.

What LGBTQ+ Education Is and Isn’t

Governor DeSantis claims that HB 1557 is not about hurting LGBTQ+ children, but simultaneously refers to it as “injecting sexual instruction to 5-, 6- and 7-year-old kids.” This narrative is false. Age-appropriate LGBTQ+ conversations to elementary school children might simply include reading a book that includes a trans character, or a gay teacher mentioning his husband to the class, or students discussing LGBTQ+ family members among each other. The language under this law is so broad that all of these conversations which allow for greater understanding and acceptance of the queer community might be banned.

Furthermore, teachers will have to shut down these conversations, as gender and sexuality are already important to children of even this early age group. According to a 2021 study from 210 trans adults in the United States, “Most patients [78% of trans men and 73% of trans women] reported experiencing [Gender Dysphoria] for the first time between ages 3 and 7 years.” (More on gender dysphoria’s relationship to this conversation in the next section.)

Statistics for gay, lesbian, and bi youth are similar. A 2011 survey of 1507 adults who had previously indicated minority sexual attraction on California Health Interview Surveys found that 18% of respondents were in a Child-Onset group, wherein their first homosexual or bisexual attractions occurred by an average of 8 years old. However, this number also includes up to 5% of respondents who had felt this way all their life: “For those who responded ‘all my life’ to a particular milestone variable, we substituted the minimum valid age from other participants for that milestone.”

Being LGBTQ+ is not a choice. It is not something our youth can ever change about themselves, no matter who might want them to for whatever reason. There is no educational curriculum which could ever convince a child not to be queer–only curricula and policies that would convince a child not to accept or embrace their queerness. And these policies are already happening in many states.

That said, six states (California, Colorado, Connecticut, Nevada, New Jersey, and Oregon) have laws that require affirming LGBTQ+ education in the classroom. You can see a full state to state policy map here.

Meanwhile, the GLSEN Research Institute’s 2021 report Improving School Climate for Transgender and Nonbinary Youth states that “schools are not safe or welcoming spaces for LGBTQ+ youth, who face hostile school climates due to their sexual orientation, gender, and gender expression.” Greater positive acknowledgment of queer individuals could serve to break down these barriers and help students be more accepted in their communities; disallowing their education can only serve to further ostracize and disavow them.

What Being LGBTQ+ Is and Isn’t

Being trans is not defined by whether or not you experience gender dysphoria. Per the National Center for Transgender Equality:

A better marker for being trans is whether or not one experiences gender euphoria at identifying as any gender other than the one they were assigned at birth. In other words, being trans is not defined by stories of suffering, but by stories of joy. Similarly, finding out you are part of a minority group in terms of sexual attraction is also a story of joy–the story of a person finding out what kinds of people they are able to love.

Laws that target LGBTQ+ youth aim to rob them of that joy. Rhetoric that calls it “transgenderism”–either implying a medical disorder (which does not define the trans experience) or an ideology (which it is not) harms trans youth. Worse is the rhetoric given by Governor DeSantis’s press secretary, who said those who denounce HB 1557 are “probably groomer[s] or at least you don’t denounce the grooming of 4-8 year old children.” Chief communications officer of GLAAD addressed this issue in 2020 regarding a Facebook post that claimed allegiance between the queer community and pedophilia: “There is a long-standing, homophobic and transphobic tactic of inaccurately comparing LGBTQ people to pedophiles and being LGBTQ to pedophilia. It’s debased and vile.”

Being part of the queer community is also not simply a recent trend. Same-sex relationships and people who did not fit their assigned gender at birth have existed for as long as culture has existed; see this brief summary of LGBTQ+ history to learn more.

While being trans is defined by euphoria and not dysphoria, make no mistake–being accepted as LGBTQ+ in today’s climate that attempts to turn being queer into a diagnosis or ideology is a matter of life and death. Reporting by The Trevor Project, a hotline and resource to affirm and support LGBTQ+ youth, found: 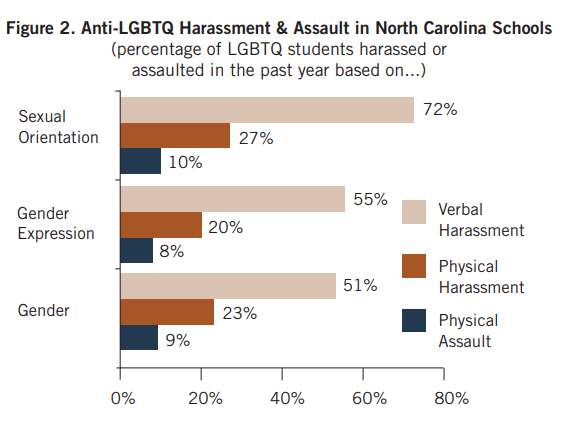 And this harassment and assault appear to be impacting their mental health deeply. Between March 2020 and March 2021, The Trevor Project reported fielding crisis calls from 2,000 LGBTQ+ youth in North Carolina.

North Carolina does not have any pro- or anti- LGBTQ+ education laws in place right now, but as this issue gets more and more national attention which is certain to extend into the 2024 election, we will almost certainly see it discussed in our state over the next few years. (In fact, DeSantis’s support for this law is almost certainly related to his likely 2024 presidential bid, and would therefore be a primary talking point as we prepare for the 2024 election season to begin.) As Abbott writes, “censorship in another state can set the precedent for a spreading movement to dictate what teachers can and cannot say.”

What You Can Do

There is nothing inherently negative about being part of the queer community; it is simply a different way to live than what society has deemed “normal”. Whether or not your school teaches LGBTQ+ education, you can inform yourself and your children or family members on how to understand and accept the queer people in your life. Trevor Project has guides on how to support and affirm the identities of trans and nonbinary youth, gay and lesbian people, bisexual people, and asexual people.

You can encourage your school district to request a speaker from Equality NC to come to their classrooms to discuss and answer questions about LGBTQ+ youth. You can also find out where your elected officials stand on LGBTQ+ legislation and pressure them to support education that would protect and affirm our queer youth.

As LGBTQ+ education is unlikely to disappear as a topic of national conversation, it is important to stand up for the queer people in your life and not allow any more anti-LGBTQ+ legislation to pass in any state, especially not North Carolina.

Valarie is a content and grant writer specializing in mental health and social justice. She lives in Asheville, North Carolina with her dog.

What Our Clients Are Saying

Attn: ABSOLUTE ADVOCACY & STAFF I personally want to take the time and consideration in all... [READ MORE]

Jose
by Jose on Absolute Advocacy
thanks :)

Hell of a team you guys are. From helping with required drug screening to ensure the classes where affordable... [READ MORE]

James
by James on Absolute Advocacy
Awesome program and staff

This is one of the greatest most comfortable experiences I have ever had the staff is awesome. Dameko... [READ MORE]

Know someone that can benefit from our program? Let us know. We’ll email you some helpful information to get your friend on his/her way to recovery.
Refer a Friend
Call Now